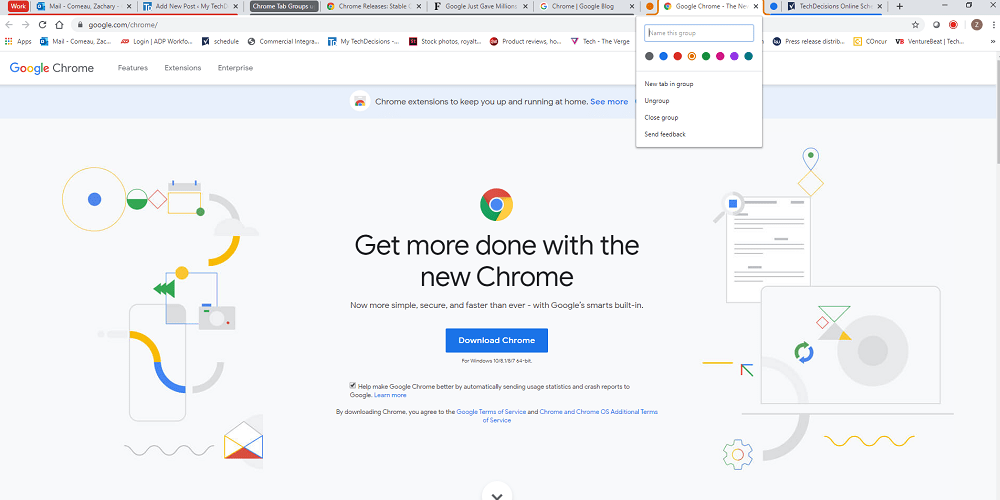 A few months back, Google revealed that its Chrome window tab group would have a handy new feature. Now, almost four months after the launch has begun, everyone has access to tab groups at last. The features called Tab Groups will help the grouping of the Chrome browser.

This role helps google Chrome users to organize active tabs into various groups and improve their workflow. The role is available to users on Chrome OS, Mac, Windows, and Linux in the new update of their Chrome browser. In addition, this feature is allowed by default for all users in version 85.0.4183.102 of the Chrome browser.

The team has been working on it for a long time and Google has released this feature earlier this year to some users. Now, after extensive A/B testing, the company has announced that the new Chrome browser update is available to all. People are provided with the Tab Groups features via the beta channel or flags.

How Tab Group will work in Google’s Chrome

With this new feature, users can add sets of different tabs in a tab group, which users can arrange with names and colors. The groups will enhance the organizing of your work to meet your requirements. The feature is easy to use and users can customize the function to mix similar positions with the Chrome browser to clean it up. This feature is especially useful for users who used to open dozens of unorganized tabs for work.

You must first click on a tab to select the ‘Add to new group’ option if you want to create a new tab group. When a new group tab is set up, separate open tabs can be drawn across the group strip and these tabs can be added to the group automatically.

In addition, a menu opens with a tapping on the group icon to enable you both to set a custom name and color. You must right on the tab and click the option “add to the existing group”  if you choose the tab group to be expanded and then select the tab group.

To get this feature, you have to upgrade to version 85.0.4183.102 when you use the Chrome browser on Mac or Windows. On the other side, the update to version 85.0.4183.84 or newer of your Chrome for Chromebook can enable the feature. However, when the latest update is rolling out to iOS and Android is not yet clear.