#EndSARS: If Anybody Collects Money Drag The Person Out, says Aisha Yesufu 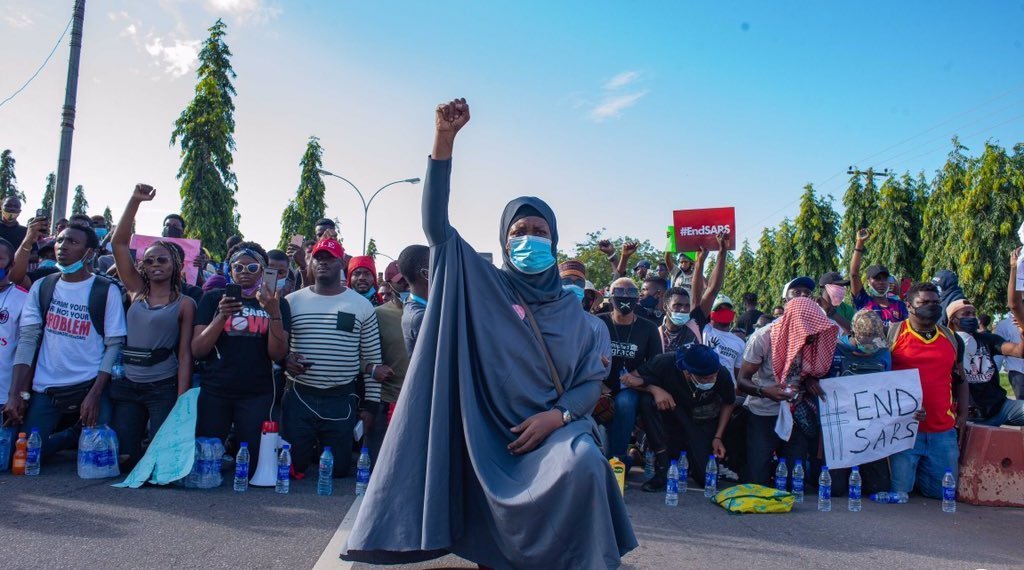 Sociopolitical activist Aisha Yesufu called on #EndSARS protesters throughout the country not to surrender or be unfocussed in their call for a restructuring of the Nigeria Police.

Recall that Nigerians have taken to the streets to protest extrajudicial killings and brutality by the now-disbanded Special Anti-Robbery Squad (SARS).

He also ordered former operatives of the disbanded SARS to submit themselves for psychological and medical examination at the Force HQ.

Unsatisfied with the IGP’s actions so far Nigerians on social media began another advocacy using #EndSWAT as a replacement for #EndSARS which was the number one trend globally for more than 48 hours.

Nigerian youths vowed to continue with protests in Lagos and Abuja.

Causing further storm on social media were reports of some leaders of the #EndSARS campaign meeting with four state governors and billionaires to find a solution to the continued strike.

“They never fought for you. They waited for the advocacy to mature and seek to sow discord just to take over the narrative for their hidden agenda. You know them. They care less if you live or die. Keep your eyes peeled. Focus on the Goal.

“Hustlers being controlled by the lust after money are playing games and throwing narratives around. Your rights to protest must never be commercialised for any agenda. Check the patterns and note the players while keeping your focus,” he wrote.

But reacting in a video uploaded on her Twitter handle, @AishaYesufu, on Wednesday morning, Aisha advised the protesters not to be distracted by the leadership tussle.

“Please don’t get distracted over this issue of who is this, who is not what; eye on the ball —forget the distraction. There is nothing yet for you to go into fighting mode over. Focus on your message and the results that you want. That’s what is most important.

“Yes, we have seen the headlines from the government but have you seen the execution plan?

“Can the government bring an execution plan where we know A, B, C, D, this is what it will do from this time to this time, what will happen with time frame? That is what is most important.”

“A lot of people who are not being part of this protest as you will expect are trying to discredit it by talking about the protest being monetised. If anybody collects money for the protest, drag the person out, let those who didn’t collect money do their thing.

“If yours is monetised, another person isn’t monetised. I wonder why we want to drag things down. This is part of the things that had hurt the older generation and that is why we’ve remained divided and we have not had the country that works for all of us.

“Please don’t get distracted, focus on the issue. You are doing so great. You have woken up, you’ve found your voices and you have even given us also voices. #EndSARS now, #SARSMustEnd and we must have a great nation. Nothing else matters.”